Now it's time for me, to share my climbing stories with you my friends!

Becouse I just have opened this page I decided to start with a trip from Font, which I spent with Slovenia team. I'll try to be short, so I'll just publish some of my hardest ascents and comment them. 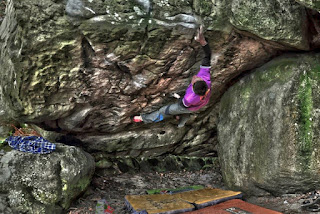 All started with getting used on sandstone and magnificant shapes of it(slopers,bad footholds,...). So we were just climbing easy stuff up to 7b+. In one 7a+ we were all defeated when Maja sent it like nothing. All the guys we needed so many tries to maintain the honor and on the end, few of us finally finished it. For the weekend we were climbing in Bas Cuvier and around. We also had kind of competition with Franch team, where I showed good performance and took 3th place (the best Slovenian). On Tuesday we were back to Cuvier Rempart where I had some unfinished business. It was a little wet, but soon become good enough to show what I'm able to climb. The first 8a (Le Grand Angle du Font) it was dry I tried and after 5 minutes I was on the top of it. Then I went down to another 8a+ (Gourmandise raccourci) which I couldn't send few days before, but this day I had no barriers(frist go that day). I did all the moves in Kheops in 5 minutes, but than  I cut my finger on the starting crimp. Next day we spent in Rocher cailleau where I flashed 7c (Vandale), in few tries sent 7c+ (Coeur d'Alien) and than in second go, the same boulder from the sit, which is 8a+ ( Ventricule gauche). On the same day started to rain, but we decied to find sector Recloses, so the next day we could come back. I haven't flashed 8a for long time now, so I was really psyched to flash 8a (Opium). I tried it after Klemen and suddenly, I was on the top of it. Good vibes I transferred to neighboring 8a+(b) (Narcotic), which I sent on second go. Also I showed a good shape earlier in the morning, when I sent 8a+ (Gecko) third go, which I couldn't do last year. I also did all the moves from a sit(project for next year). Also 7c (Alea Jacta est), wasn't problem for me, so I flashed it. For the end of a trip, I climbed few easier, but very nice boulders in Buthiers and I lost my sunglasses. Ok, that's all about this trip. So join me for next stories!