Slowly Kruder turns into a alpine climber. This time I sent one  of the "hardest" Slovenian multi pitch routes called "Das ist nicht kar tako". As usually in the mountains, the biggest problems to me was a hike up to the walls. Because to the house in a valley of Tamar is a dirt road, me and Alpi (Bojan Hribernik) decided to go there by bikes. It still took us about 20-30 minutes, but it was worth it on the way back. From there on you still have to walk for another hour and a half and also climb some easy stuff to get to the first pitch. From there you start immediately with a vertical 55 meters of solid 6b climbing, where I was the leading one. After that another 55 meters 6b with an easy boulder crux in between. Next pitch was supposed to be the hardest, with a 7b+ grade. I on sighted it and I think it deserves just 7a+ or may be 7b, because it's very short and a bit overhanging. From there on, there were another 4 pitches of 6b- 6c vertical climbing and finally I was standing under the last hard pitch of the route. I gave everything to on sight it, but the route won the battle. After 25 meters of slab climbing, I fell on the last crux on a very delicate slab. When I figured it out, I came down to the anchor, took some 10 minutes of rest and I was back again. With all my power I have from bouldering I did it up to the crux again and again with some bouldering skills did the last slaby crux as a real slab master. Comparing to the first hard pitch, this one is harder for sure. So I think first one is more like 7a+ and this one 7b (or maybe even 7b and 7b+).  Alpi was leading the last 6b+ pitch and scared shit out of me when falling. I thought I'll fail it too, because I was already tired and I felt a bit cold. Also the pitch was a bit crumble. So Alpi somehow made it to the top and I was following. With such a huge motivation to send the whole thing, I turned on bouldering mode again and did it without any fears. This time the way back was so much easier than the last time in multi pitch climbing. We took some 6 abseils and than the descent on the scree. As I said, the way back from the house was also so much easier with the bikes. It felt so good when we made it back to the car, knowing that I sent alpine route that caused some problems even to some good Slovenian alpinists. 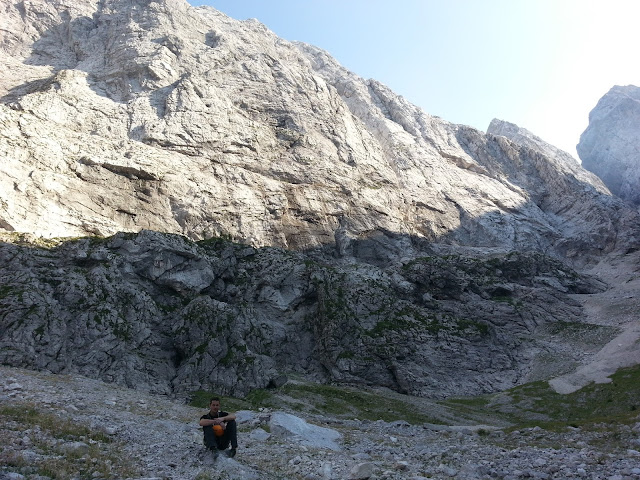 me after a send, under the route 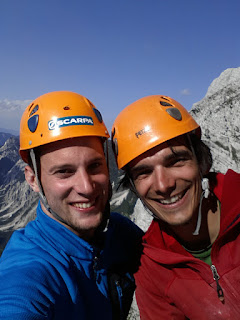 me and my loyal partner Alpi

This time, after a long break of writing I'm finally here with some different news. Because the World cup season was far from good, I decided to climb more on rocks, specifically with rope. So this story is all about a multi pitch that me and Vezi did yesterday.

Because our plan for September is to climb an 8b+ multi pitch in Switzerland, we knew we have to get used of the heights first. So the perfect route was Immer der Nase nach in Rochelstein (Grazer Bergland), which I already tried some years ago, but couldn't finish it. I lost my quickdraws and other stuff for multi pitch climbing somewhere, so problems started even before we got there. Luckily the route is so well protected, we only needed some quickdraws and helmets. We started at 6.15 from Celje in hope that we will climb at least some route in the shade. Unfortunately after a long hike to the route, sun was already in the wall. We didn't hesitate and immediately started with climbing, because we both wanted to red point all of the hardest pitches. I was leading the first real pitch (6c+) and Vezi was following fast. I gave Vezi a chance in next one, so he could try to on sight it. The 7c pitch was a bit too complicated for on sight, but he found all the tricks and came down to a ledge. It was my turn. Vezi gave me such a nice beta, so I didn't even think about falling. There was Vezi's try again. With some struggle he managed to sent this beautiful slaby 3rd pitch. And finally we were at "the Nose". Short, overhanging pitch with original grade of 10-/10 (8a+/b). The hardest moves are at the first 3 bolts, slapping slopers on very steep compression pillar. After that, you still have to be a bit careful on some tricky boulder moves. Even though we're boulder climbers, the moves were really hard to us, so we both agreed with 8b grade. So we both spent just few tries for that one and finaly we were under the last pitch. It was getting very hot and we were running out of water. I immediately started with climbing in last 7a pitch, which had a bit loosy rock. At the end of it, there was a bit weird slab climbing with some hidden holds. I fell. I was pissed of, because I did't all the hard work already and now I'm stuck here on one of the easiest  part of the route. I came down and Vezi started with climbing. It was so close, that the same nightmare would happen to him as well, but it didn't. He did it and I didn't. He came down, we drunk all the water we had and it started to rain a bit. I knew, I only have one more chance. It stopped raining, sun came back and the battle began. I was climbing fast and all the time I had it in my head, I'm not supposet to fail. Luckily, I exacly knew what I have to do, so I did it too. Such a release! But new battle begins. 1 and a half hour of  descent without water. We were walking down as fast as we could, but our lags were so tired we barley walked. We reached the car. I opened the car- I had another bottle of water, which was boiling from the heat, but it felt good. The temperature at the car was 40°C. Anyway, mission was accomplished. Next stop was McDonalds and the day was almost over!

The week before I also climed some route like Povodni mož 8b+, Ritem v zraku 8a+ on sight, Alta area L3 8a on sight and Hello Kitty 8a flash. Also bolted a new route in Kotečnik- needs some glue, but feel free to try it.

In Rocky mountains I did a very nice bouldering tick list in a day. I sent The kind traverse 8a 2nd go, Veritas  assis 8a flash, Storm shadow 8a+ and Veritas low 8a+. 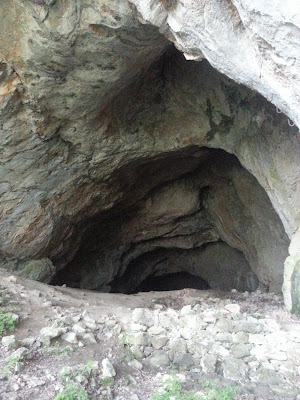 very nice and cold cave on the way to the wall 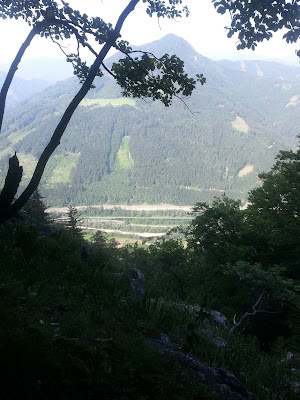 the view from the path 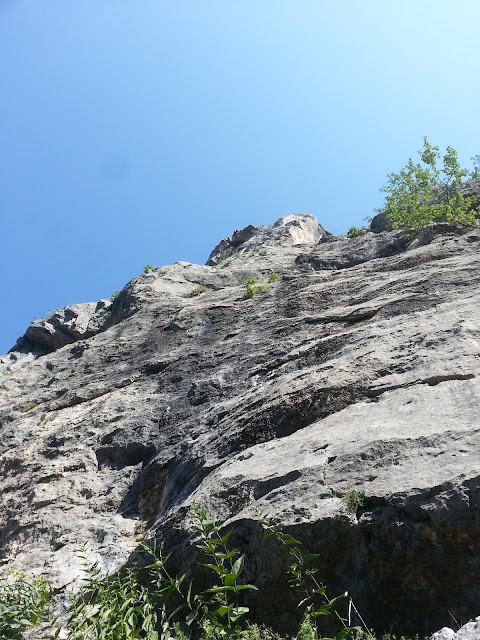 route from the ground 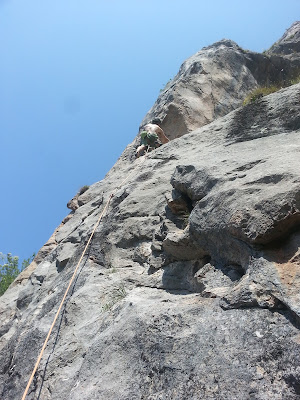 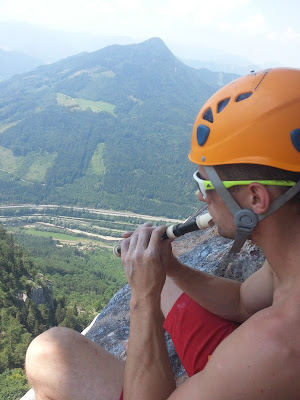 having some fun before real business 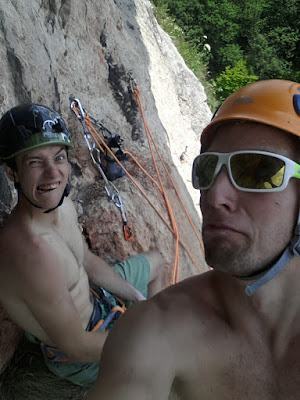 Some shade before hardest pitch 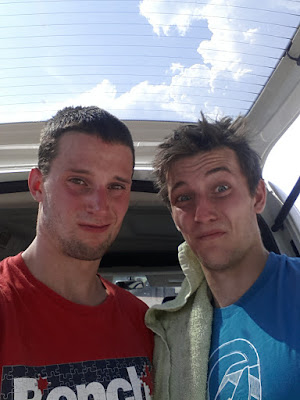 back in the car- the survivals